Volleyball Defense How Does Blocking and Digging Work Together?

After your team serves your front row blockers are the first line of defense to stop an opposing team's attack hit while back row diggers are the last line. 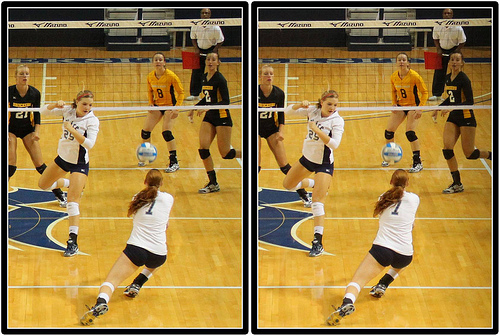 Volleyball Defense: What To Do After You've Served The Opposing Team-Learn how blocking and digging work together (Michael E Johnston)

The block in volleyball is the first line of your team's volleyball defense when your squad has earned the right to serve the ball.

Once the ball crosses the net your players and teammates are on defense.

Volleyball Defense: When your team is serving, once the ball crosses the net your players and teammates are on defense. (Ralph Aversen)

The three players in the front court as blockers work together with the three in the back court who's job it is to keep the ball off the floor when and if it comes past the block.

Just so I'm clear, there are two ways to try and keep the other team from scoring a point when your team is serving the ball.

The first way is at the net where your front row players are in charge of blocking the opposing team's attempt to hit the ball into your team's court. 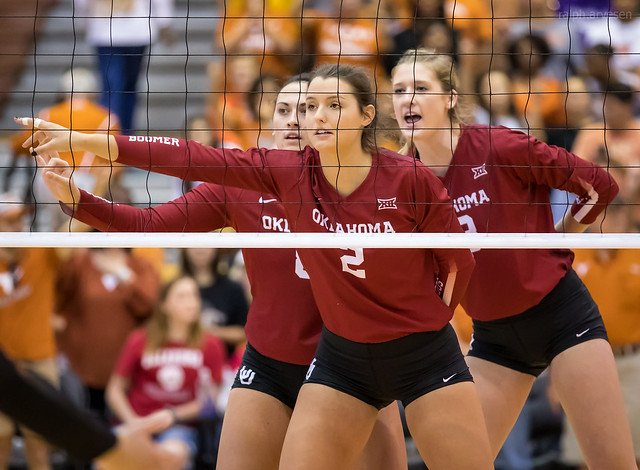 When your team is serving, once the ball crosses the net, your team is on defense. Your Front row blockers are the first line of defense against the opposing team's attack hits. (Aversen)

The second way this happens is if the opposing team has successfully hit the ball past your block and into your court.

Then your team's back row players are in charge of digging or defending that ball in an effort to keep it off the ground on your  side.

This example is illustrated perfectly in the picture of the volleyball player below who's digging a ball after the opposing hitter was successful in getting the ball past the triple block put up by the digger's front row players. 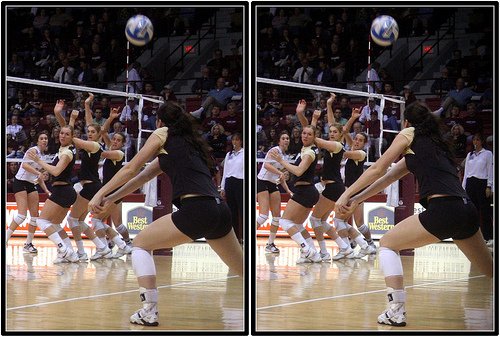 Volleyball Defense: Colorado Triple Block Directing The Ball To Their Defensive Player After Taking The Hitter's Line Shot Away

When playing defense, the ultimate goal of the defensive team is to

Volleyball Defense
How Blocking and Digging Work Together 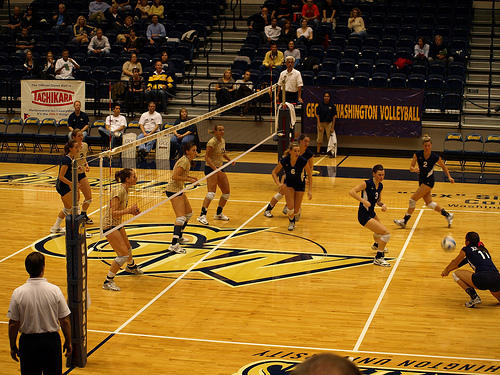 Volleyball Defense: When playing defense, the ultimate goal of the defensive team is to keep the ball off their floor. (Laurie Mayer)

A team in defense has blockers that take one area at the net while diggers plant themselves in the back court outside of the area that the block takes.

In the video above the serving team (in white) is on defense. The team receiving the serve is in serve receive.  Once the serve crosses the net, the defensive team's three blockers wait at the net to try and stop the ball from coming into their court.

If the ball gets past the blockers, then the players in the back row play volleyball defense by digging the ball into the air to keep it off the ground.

If they do, the team has two more contacts, for a total of three, to get the ball to one of their hitters and attack the ball back over the net.

When the blockers  take away a certain area of the court, the diggers should systematically cover the other parts of the court.

On volleyball defense when blockers take away an area of the court, the diggers cover the other parts of the court. Texas blockers block cross court while the libero digs the line. (Ralph Aversen)

This way most of the open spaces on the court are covered in team defense, making it harder for the opposing team to hit the ball to an open space.

Basically if the front row players can't do their job successfully by putting up a good block then its the back row's player responsibility to keep the ball off the floor.

The front row players spend hours in blocking practice drills so that they can work in tandem with their back row players, so that everyone knows where to be, what to do and when to do it. 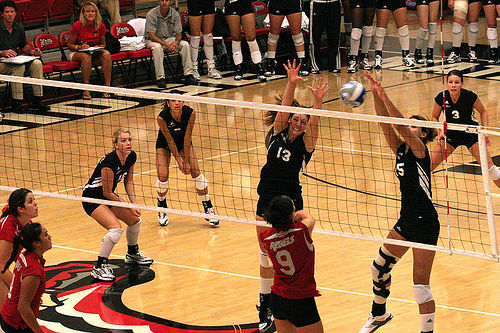 Learning how and where to time your jump when you block in volleyball is important because when the blockers are consistent with their movements and placement in the front row, then the players in defense behind them know exactly where they need to place themselves in the back court.

In order to effectively do this, the front row blockers have to know where to be when they have a hitter who hits in a particular direction, let's say cross court. 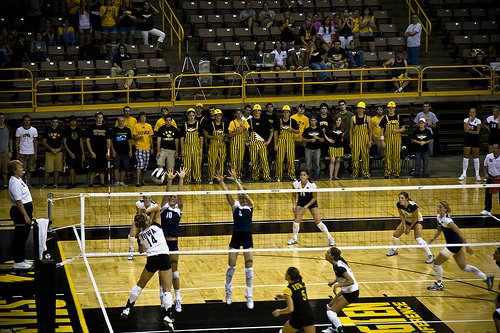 Volleyball Defense: Utah Blockers With Backrow Defenders Outside of the Block Against Iowa Hitters 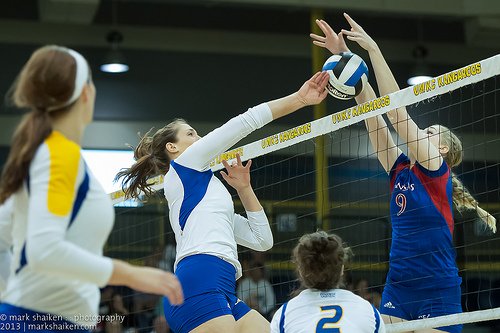 That's why it's crucial for in volleyball defense for blockers to have good technique against different hitters who spike different kinds of sets, at different speeds, at different locations along the net.

This is what helps many top defensive teams win points.

This is a basic explanation of volleyball defense strategy.

are important for a player to be good at, especially if you play all six positions for your team during a match.


As players learn more about the game, then they learn more advanced volleyball defense strategy like 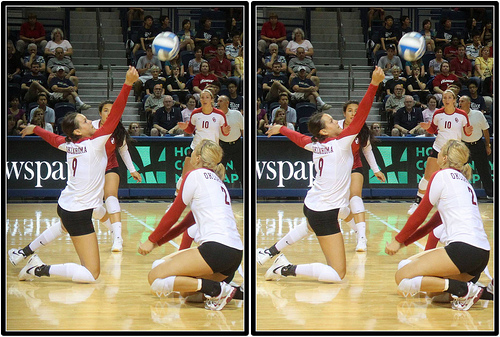 All these things are a part of learning how to adopt your team's volleyball defense strategies.

Volleyball Defense Strategy:
Where To Go From Here