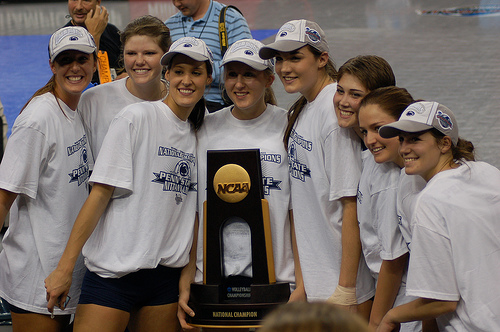 The NCAA Volleyball Selection show is a televised broadcast presentation that airs on ESPN at the end of each regular season during the last month of November where all the teams that have qualified to participate in the NCAA women's volleyball championship are announced.

Its an annual postseason tradition for players, teams and fans to gather together where they crowd around the screen at their local eatery, a teammate's home, a coach's place or even around an off campus bonfire to watch as the top 64 teams playing in the current year's NCAA volleyball championship playoffs are revealed and qualifiers are announced. 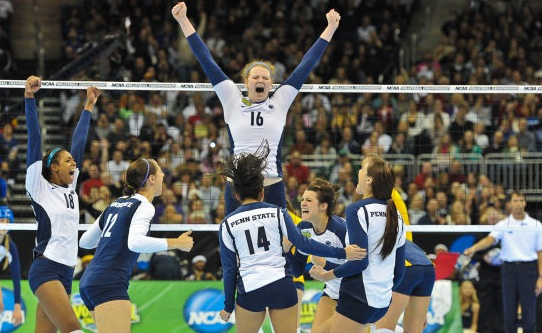 Of the over 330 women's volleyball teams in Division I, only 64 teams with their coaching staff, coaches families, players, players families and fans from all over the country, have formal or informal "watch parties" where they

which leads to a ton of suspense and drama for those hoping for a good seed and a chance to play in front of their home crowd at least in the first round of playoffs.

Every year, the tension builds up because of the drama due to the fact that one or more of the top ranked teams in the country end up getting a seed that they and their fans are disappointed with.

Two years ago, in 2017 it was Nebraska and Texas  two of the top teams that were left out of the top four spots. 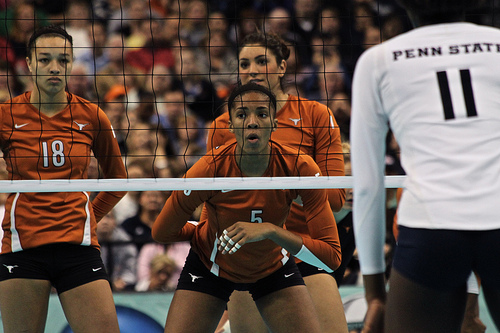 Last year in 2018 Nebraska once again was not picked by the NCAA volleyball selection committee to receive a top four seed.

NCAA ended up making it to the NCAA womens championship finals...but lost to Stanford in five sets.


Here are the #NCAAVB Selection Committee's top 10 teams based on results through this past Sunday: https://t.co/iRwPeCb8cf pic.twitter.com/eTvWFs60WH

Watch the players, teams and coaches reactions as they learn who and where they will be playing in the 2017 NCAA Championship playoffs which began on Thursday December 1st.

Pitt finds themselves in the Penn State bracket where they face VCU in the first round.

What a moment at last night's selection show! Hear what head coach Dan Fisher had to say, along with redshirt junior Angela Seman after finding out the squad is going dancing! #H2P #Become #NCAAVB pic.twitter.com/lwHYVXnrhd

Michigan State earned an at-large bid and will travel to Omaha, Nebraska to face Missouri State in the first round of the NCAA Tournament.

The Illini found out they play Hawaii in the first round. See their reaction as players watch the NCAA Volleyball Selection Show.

Wichita State were shocked to find out they'd be hosting the opening round of the NCAA Volleyball tournament in Wichita, Kansas.

Check out the happy reactions...

In the Penn State bracket, the Rainbow Wahine face the Illini...


Got that #FridayFeeling - two days til our #NECVB champions find out where they’re going for the #NCAAVB tournament! Selection show is this Sunday at 9 pm. #BlackbirdNation @liu_volleyball pic.twitter.com/5IqIT1UVMH

One of the biggest shocks of the bracket Texas currently on an 18 game winning streak comes in seeded 6th, placing them at the bottom of the Stanford bracket.

If they win all their games in the first second and third round they face Stanford in the Final Four in order to advance to the finals again this year, repeating last year's season ending performance.

Oregon State faces North Carolina State in the first round.

Colorado has an interesting draw in the first round facing Michigan right away.


It's time to dance! #KUvball
#NCAAVB Selection Show is tonight at 8pm CT on ESPNU pic.twitter.com/WyPDxhMh5f

Look how excited Kansas is about going to the dance.

Colorado State is ready for the NCAA Volleyball Selection...


We're all at The Mayor Of Old Town! Come and watch the selection show with us! #PointRams #NCAAVB pic.twitter.com/bps8ks8A46

Washington State finds themselves in the Kentucky bracket where they face Florida State.

East Tennessee State faces the most controversial team picked for the top four, Kentucky the top team in the bracket.

Watch American University's coach Barry G as he talks about playing against the 13th seed BYU.

It looks like Oregon is ready! They'll face Kennesaw State in the first round.

Counting down the hours and getting pumped for the #NCAAVB Selection Show like pic.twitter.com/VRv4zzqm9Z


Giving thanks for the season and what’s to come

You can get your tickets for TWO home weekends Tuesday morning! pic.twitter.com/fa4059toPV

At the top of the Florida bracket are the Gophers, seeded 7th for the NCAA playoff tournament this year. Watch the player interviews during the 2017 NCAA Volleyball Selection show Watch party.

Watch as Coach Jeni Jones and the Sugar Bears react to the NCAA Volleyball Selection Show announcement as they learn they will travel to Los Angeles to face the 10th seed USC in the first round.

Wonder what three-time Pac-12 Player of the Week sophomore Khalia Lanier has to say about playing the Sugar Bears in the first round?


Pssst! Word is out that we’re #NCAAVB tournament bound! The selection show is in just under an hour on @ESPNU! #FightOn ✌❤️
: @halihelfgott pic.twitter.com/5ldVBXTvZs

In case someone is hiring...Florida just updated their resume...Florida faces Alabama State in the first round...

We've got our résumé updated and ready for the #NCAAVB Selection Show tonight on @ESPNU!

Tune in at 9 PM to see if it's enough for a ☝️seed pic.twitter.com/6TWRqNtD5Y

We are just 4⃣ days away from the #NCAAVB selection show.

Make sure you tune in to see where your #Pioneers will be playing. pic.twitter.com/IIOuNYBubV

Thanks for visiting this page. I'd love to know what you think of the seedings in this year's NCAA Volleyball Selection Show?

Continue to come back often and read Improve Your Volleyball to keep up with the latest news and articles.

Be sure to subscribe to our emails newsletter. You can subscribe by leaving your name and email in the box in the top right hand corner of this page.