Volleyball Talk on the Court: 5 Things To Say Before Your Team Serves

Learn five things to say before your team serves like what to tell your setter, how to remind hitters to cover and other volleyball talk on the court. 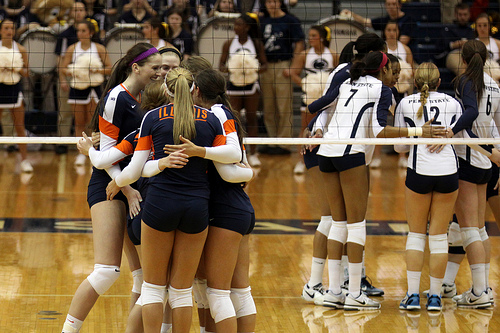 Discover five tips on the types of volleyball talk on the court to use to help you make your teammates become better players.

Discover five tips on the types of volleyball talk on the court to use to help you make your teammates become better players while improving your volleyball leadership skills. 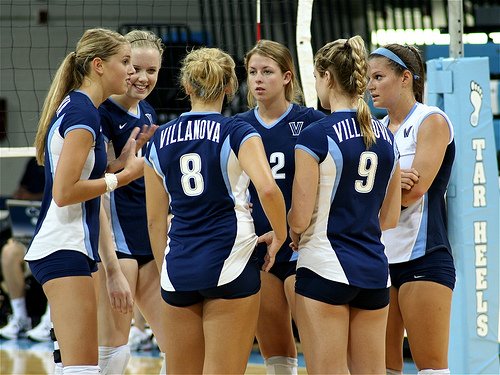 Learn five things to say before your team serves like what to tell your setter, how to remind hitters to cover and other volleyball talk on the court.

As a Hitter, Call For the Ball from Your Volleyball Setter

Especially for a high ball attack, I was taught that whoever calls the ball the loudest wants it the most. This really makes a difference for a setter who has to run and chase a pass that's off the volleyball net.

You have to understand as a hitter that your setter as she moves out of her comfort zone to focus on the ball may lose sight of her hitter options.

If you were a setter if you couldn't see your hitter very well you would have to rely on your hearing.

One of the best ways of letting a setter know Where you are (aka Where she needs to set the ball) and that you are ready to hit the ball is to yell at her (or for the ball) ...L-O-U-D-L-Y!!.

What she can't rely on visually she can rely on with audio--so you have to be loud and you have let her know you want the ball.

This is a good way to direct traffic on the court and to increase your volleyball leadership skills.

Whether it looks like you are going to be served or not Talk about what you see the server doing.

If the last time a server has stepped up to the line she served the ball short if it looks like she is going to do it again Be prepared to Say it to your teammmates..."Watch the short serve".

Do it for whatever you see deep serves, short serves, cross court, down the line. I do this all the time especially when its quiet and the ref has blown the whistle already.

I'm sometimes the only person saying anything but I don't care. I'd rather warn my teammates about a possible short serve than be caught with my pants down by a surprise ace.

What happens in this case. Some front row players who may be nervous and not focused enough will key in better and take a step up towards the net just because you warned them about the possibility of a short serve.

Get use to commentating on what you see during the pauses in play. Use that time to let the other team know you are prepared for anything. Eliminating the element of surprise instills confidence in your teammates.

Volleyball Talk on the Court
Remind Hitters To Cover 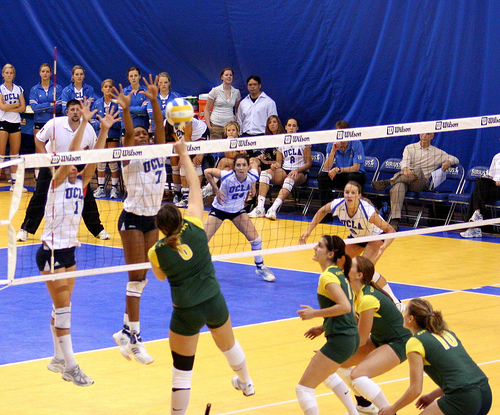 Volleyball Talk on the Court: The coolest thing to a hitter is to hit a ball, be blocked and to see another teammate pick that ball up so that the hitter has a second chance to put that ball away.

I've seen players get resentful for being reminded to "cover" by other teammates.

So here's a cool way of "reminding" your teammates. Do it yourself.

Obviously another way of improving your volleyball leadership skills what usually happens is Monkey see, Monkey Do.

When YOU cover Say it loud "Cover" and then do it.

The coolest thing to a hitter is to hit a ball, be blocked and to see another teammate pick that ball up so that the hitter has a second chance to put that ball away.

Instill confidence in your front row hitters by always having their back in coverage.

4. Remind Your Blockers about Hitting Tendencies of Opposing Hitters.

If you see one of your front row players jumping to block someone who doesn't jump to hit...why block? I see this alot.

Two hitters spend the energy to go up and attempt to block a ball that has an upward trajectory (going towards the ceiling and then has to come down) so its a down ball that 9 times out of 10 the block is never going to touch.

So why not spend that same energy transitioning back early into a down ball defensive position and concentrating on making a precise defensive dig so that you can run a fast offense.

Make the other team pay for giving you a down ball...treat it just like a free ball and just practice increasing your transition speed.

Let the down ball player hit the ball with no block, be courageous and let your defense get confident in digging that ball precisely.

Another thing you can tell your blocker to do is instead of going up on a weak hitter or down ball hitter to double up and help the middle blocker out against the big front row hitter.

So if you're in the backrow and you see a blocker blocking a hitter that is never going to hit let them know let that person hit with no block and to either transition off or go block someone who deserves to be blocked.

5. Remind Your Setter Where the Big Block Is.

Sometimes what's easiest for the setter to set may not be the smartest play for the team to make points.

Or where the weak blocker is.

Or where the setter is. Tell her to set THAT way not to keep setting in front of the really tall girl who is a good blocker.

And if that means you don't get set...so be it. In the name of the team increase your volleyball leadership skills... Get the Point.

Always work on improving your individual volleyball skills, remember the ball is in Your hands.

Volleyball Talk:
Where Do You Go Now?


Read more about volleyball tactics on these pages.