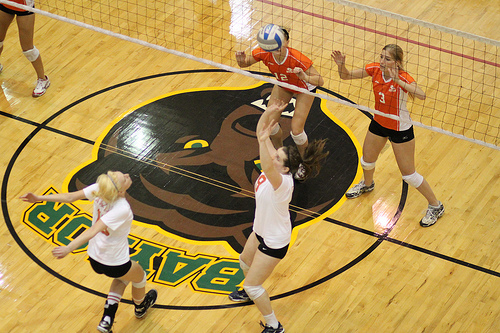 Its the one day before preseason competition begins, that you get to put makeup on, do your hair and come to practice...really pretty, why? 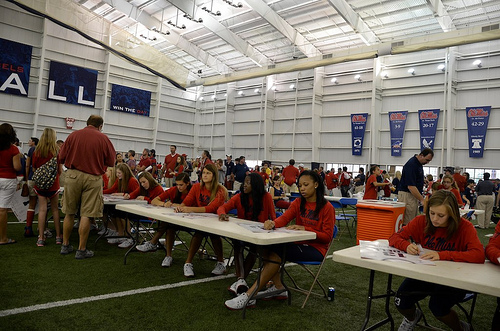 Mini videos of the girls are taken of them jumping, celebrating or smiling for the camera, which are then used on social media, and inserted in the team's hype videos and volleyball intro videos which are played during the team introductions before each match.

The sports information department at each school uses these player and team pictures and mini videos to produce tweets, GIFs, Pinterest Pins and on the 'gram,

I've selected a collection of videos and pictures that allow you to go behind the scenes of some of the most popular collegiate teams to see what each team's volleyball picture day is all about.

Watch Kathryn Plummer and teammates all dolled up ready to get their pics taken.

The 2016 Women of Troy held photo day and took head shots and team photos at Merle Norman Stadium. Team manager and USCTrojans.com correspondent Marielle Bagnard caught up with some of the Trojans during the fun start to the season.

Texas...where everything is bigger than life...tall, pretty powerful female volleyball players called Longhorns rule the camera lens for a few a few hours instead of the court.

Go with Chloe Collins, as a sophomore, as she walks you through the paces of what happens and why during the Longhorns media day session.

With a surprising, (some say shocking) sixth seed entering the 2017 NCAA playoff tournament the Longhorns, led by freshman sensation Lexi Sun enter the playoffs with something to prove

Creativity, Thinking outside of the box, fun

A trip back to 2009 when Megan Hodge and Nicole Fawcett prep to do their "Charlie's Angels" pose...all that prep for one snap.....#patience

What's the team photos shoot like for the Camels on picture day?

Follow Campbell players over the hump and in front of the lens as they strike two poses.

Nothing but camera clicks for Coach April Jauregui and the Tigers

Chris Redding explains what happens on the last day of preseason

Its Justin and the Anteaters in this Irving volleyball picture day video commemorating the days events.

Taking it back to 2013 when senior Adrienne Gehan walks you through the Bears events on their picture day session.

EYEBRONCO joined the volleyball team for its fall photo day on the Mission Campus last week. Reporters Annie Freman, Denzel Johnson, and Jared Brownridge talked to some of the players about their favorite things and the upcoming season.


The volleyball team had another entertaining photo day this year. The Wildcats kickoff the 2012 season on August 24th-25th when they host the Kentucky Classic at Memorial Coliseum.

We take you behind the scenes of UK volleyball's photo day.

Florida went all out in the video and audiovisual productions this season.

From an amazing pre game intro video light show to the super stylized on location individual player video clips taken during the preseason, the Gators started the season knowing this year was going to be special.

Lets go behind the scenes of the Houston volleyball picture day

NAU players keep up the enthusiasm throughout the shoot

Wichita #Watchus players take as many pics as the official photographer

Getting glam for the cam.

The Spartans get all dolled up for their individual shots

Thank you for visiting this page. I'd love to know which videos are your personal favorites.

Be sure to leave me a comment in the box below to let me know your thoughts.

It's easy just scroll up to the box in the top right hand corner and leave your name and email address for updates on new information, videos and exciting pictures and breaking news on Improve Your Volleyball.