Volleyball Positions: What Are The Six Volleyball Roles On The Court?

Here's an extensive breakdown of the volleyball positions on the court you can pick to specialize in including setter, hitter, opposite, middle blocker, libero. 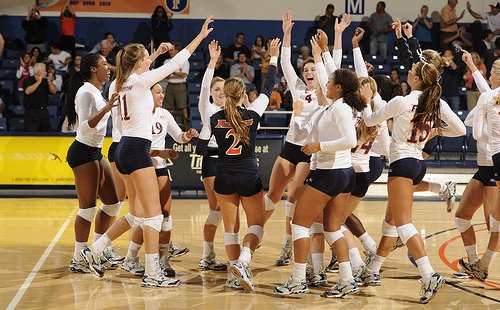 Volleyball Positions: Here's an extensive breakdown of the volleyball positions on the court you can pick to specialize in.including setter, hitter, opposite, middle blocker, libero.

The roles and primary volleyball positions on the court: the setter, hitters, middle blockers, defensive specialists and liberos and the responsibilities they each have are usually explained as soon as you join a new club, high school, college or professional six player team.

Let's go through and learn the roles and responsibilities of:


Volleyball Positions on the Court:
The Setters 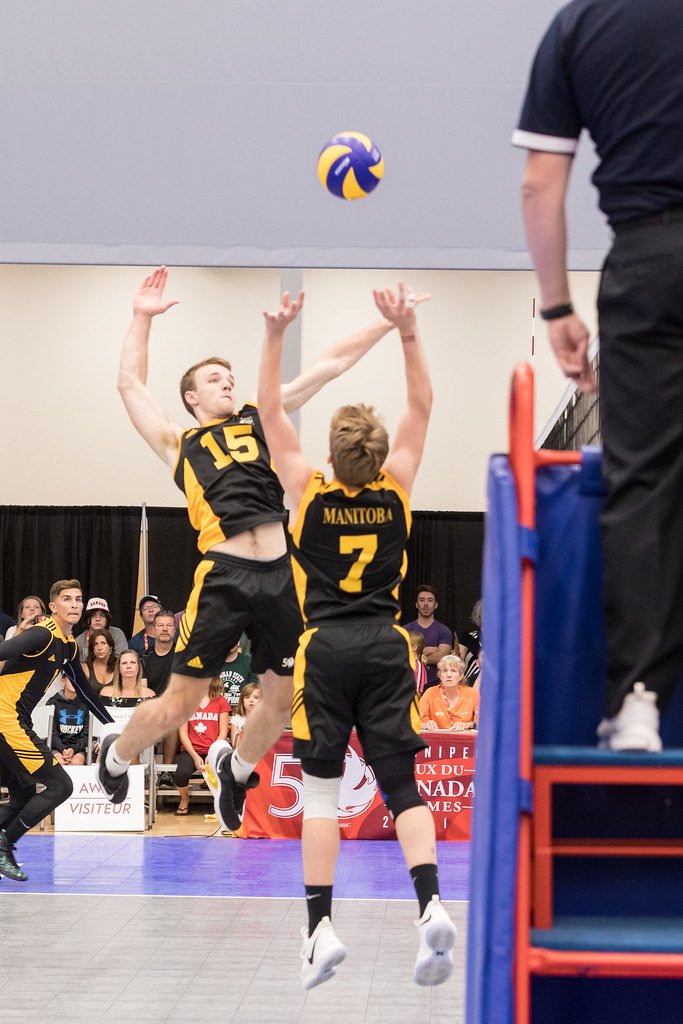 The setter position is the most important one because the setters are the unofficial leaders on the court. (Matt Dubrow)

The setter position is the most important one because the setters are the unofficial leaders on the court.

The setter's job is to 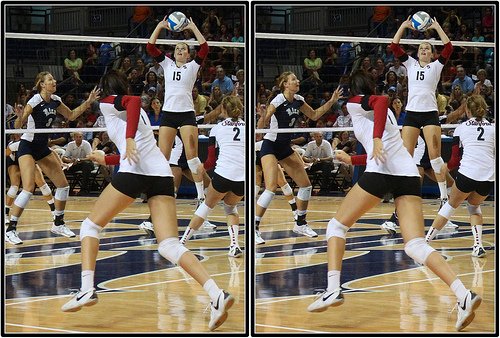 Volleyball Positions: Setters: The setter's job is to get to every second ball, run the team's offense and to outsmart the block to help her hitters score points (Michael E. Johnston)

Although it may not happen all the time, setters are trained to get to and attempt to set every second ball to one of their three front row or any of their two non-libero back row attackers or players so that they can hit the ball over the net.


The setter runs the team's offense by telling or signalling each of her intended hitters, before the referee blows their whistle, what kind of set she is going to deliver to them.

If you are a setter then you are in charge of directing your team's offensive attack, just like a point guard on a basketball team would. 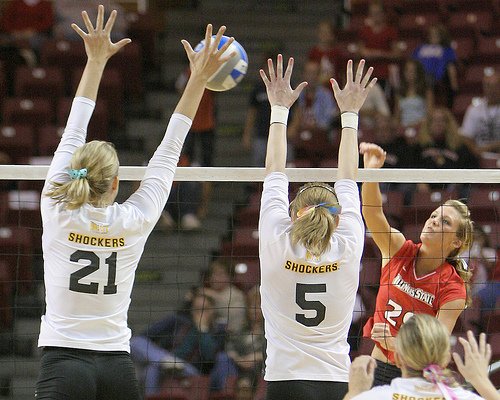 Middle Blocker Volleyball Position: Middle blockers travel laterally along the net to put up a block by themselves or with their outside blockers to stop a hit cross the net. (Bill Shaner)

The middle blocker volleyball position has the  primary responsibility once their team has served the ball to travel laterally along the net in such a way that they put up a block, either by themselves or with the help of their outside blockers, against any of the hitters on the opposing team in an attempt to stop them from hitting or tipping the ball over the net and into their court.

Middle blockers are usually the tallest players on the team and you can compare the middle blocker to the defensive linebacker in football and the center on a basketball team.

In the photo above the player wearing the #21 jersey is playing in the middle blocking position for the Illinois State Redbirds collegiate team.

If a team is on offense, and by this I mean if they are about to be served the ball, then the players that were middle blockers become middle hitters.

Middle hitters or middle attackers specialize in hitting the ball from the middle area of the net which is called zone 3 on the court.

How about that one-on-one swing block action by Ms. Batiste! Practice makes perfect!!!Check that disciplined crossover step from the middle......yasss

Congratulations on a @digthisvbc 15s first place finish this weekend! .

Volleyball Positions on the Court: The Liberos 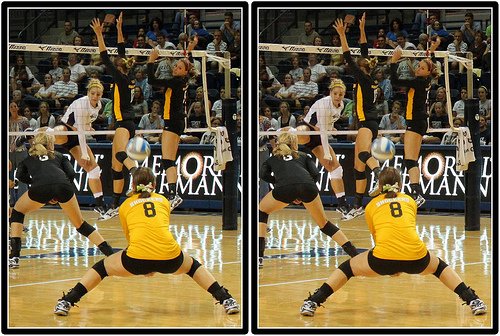 The word "libero" means "free" in Italian and it refers to the libero's ability to move freely in and out of the back court since they can take the place of any back row player.

The role and requirements of the libero were invented to be one of the volleyball positions on the court that's exclusively limited to the back row.

Liberos on the Court
What can the Libero do?

Offensive Volleyball Positions on the Court:
Left Side Outside Hitters

Professional left side outside hitter April Chapple in Italy during the Division I Italian championship finals in Reggio Emilia.

The outside hitter, usually has the third contact on the ball and is responsible for sending the ball over the net into the opponent's court with the goal to score a point.

Their primary job is to score offensive points. They are quite often the athletes on the team who are quick, jump high, and are physically coordinated and agile. 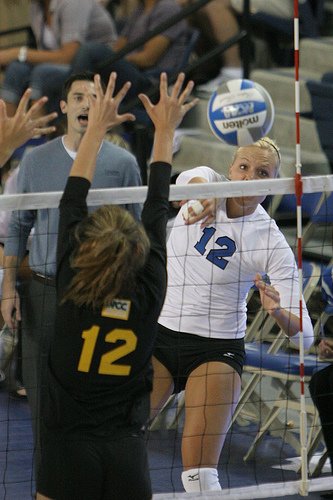 Volleyball Positions: Outside Hitters primary job is to score offensive points. Often they're quick, jump high, and are physically coordinated and agile. (White and Blue Review)

Regardless of the accuracy of the set an outside hitter may get, they are responsible for attacking the ball so the end result is a point or sideout. 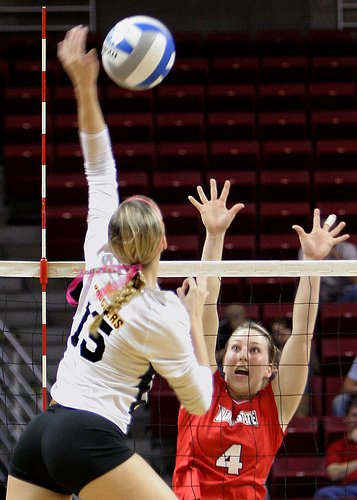 Just like there are two middle blockers on every team, there are two left side hitters per team, so when one is in the front row, the other plays opposite her in the back row.

And just like middle blockers, if a left side hitter is on defense, then she becomes the left side blocker.

Positions on the Court
Right Side Or Opposite Hitters

That would be one of the final positions on the court to talk about which belongs to the offside hitter, also known as "the opposite" or right side hitter. 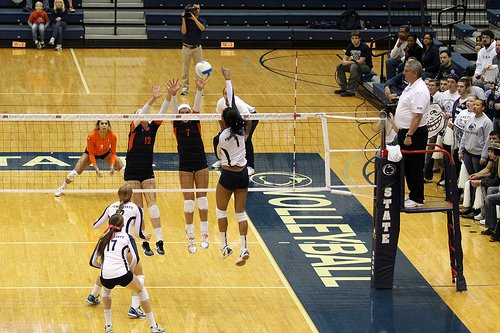 Remember the left side hitter is usually the more prolific hitter on her team, so the opposing right side blocker has a pretty important job, trying to block the ball hit by one of the best athletes on the opposing team.

This alone often makes the right side hitter position one of the toughest positions on the court to play in.

Another responsibility of the right side player occurs when her team is on defense.

If the setter digs the ball then it use to be the right side hitter's responsibility to step in to become the temporary setter, now its up to the libero to set the second ball...

She sets the ball, usually a high ball out to her opposite hitter.

The opposite hitter especially right handers have to be able to attack the ball from the right side.

When the right side player rotates to the back row to play defense, the setter who plays opposite her/him rotates up to the front row.


Read more about the outside hitter volleyball positions.

Motivation Magic
When You feel Like Quitting Remember This!


Volleyball Positions:
Where Do You Go From Here?

I got you! Here's where you need to go now! Here are three options: