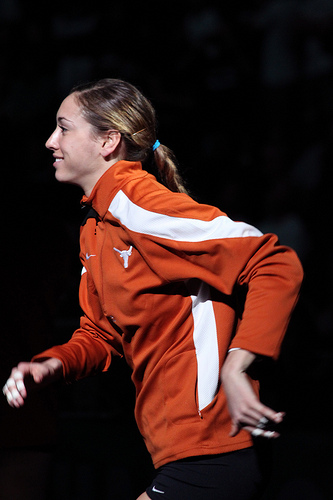 To showcase their brand allegiance, collegiate teams for the past few years have produced uniform reveal videos in an effort to show off what brands and styles they'll be wearing during the season.

Scroll down to see the reveal videos showcasing the various colors and styles of Nike volleyball uniforms the following schools will be wearing this season.

The Longhorns chose to reveal their uniform and Nike volleyball shoes on Twitter and their video did not disappoint.

One of the coolest hype vids for Kobe's kicks, the Cards who need no intro...re-introduce themselves and their new Nike volleyball shoes...

..after a quick reminder opening shot ...of who won the NCAA title last year...

Heading into the weekend with more custom pic.twitter.com/4sNybUKlRI

Check out their stylish promo that looks more like a music video than a uniform reveal...but of course..that is the whole idea, right?

The first item featured is a black long sleeve jersey with Kentucky red trim, and on the lower left sleeve "Western" is imprinted while on the right sleeve is "Kentucky" in contrasting colors.

This next uniform item featured is the short sleeve white jersey with the contrasting red trim around the neck.

The jersey number front and back and the WKU lettering is in red and outlined in black trim, while the obligatory Nike swoosh is in black.

Interestingly enough, no Nike shoes are featured in this joint.

Minnesota Gophers volleyball uniforms are going to be "on your radar" this season.

Minnesota Gophers video production team will make sure of that.

I kid you not, last season the Gophers video production team  produced a video for EVERY occasion including

Videos are top notch, great care is taken to pick the right song and the team always manages to produce expertly edited sequences meant to build and create excitement.

This year's volleyball uniform reveal vid is no exception.

This sleek video production opens with a catchy song that describes what its like...that giddy happy feeling when you put on new clothes.

"We feelin' brand new, just like a million bucks..

We always rollin dice, cuz we got all the luck...

You ain't seen nuthin yet

We got a new trick!"

Pairing the perfect song with bangin' lyrics is key...and "Radar" by the Danger Twins was an excellent choice to help launch the new volleyball uniform reveal of the Golden Gophers for 2017.

Big time school with a big time team in the Big Ten, with big time video production but no big time feature of their sponsored Nike volleyball shoes or sweats appear in this video.

Last year the Purdue volleyball team arranged an elaborate fashion show to reveal their new uniforms to the public, fans and friends.

This year the Boilermakers add drama to their low lit "from the lockerroom to the court" jersey reveal presentation.

I want to know what its like to play with a golden ball, don't you?

The Rebels are super happy about this season's new gear!

Watch as the VFL Films produced vid gets you up close to the orange white materials used to produce the home game and travel volleyball jerseys as the new partnership between the Lady Vol volleyball and the Nike program is showcased on this video.

White, grey and black are the colors of the day as we watch how excited the Georgia Dawgs are about their Nike haul this season.

Nike is a favorite partner in Virginia!

Watch as they show us the three variations of jerseys they'll be sporting this season.

Excited to unveil our brand new jerseys for the 2017 season! Can't wait to be back in Memorial Gym with these on Aug. 25! #Wahoowa pic.twitter.com/MClWiopNO0