Communicate in Volleyball:
The Importance Of Team Talk While On Defense

Three important things to communicate in volleyball, call out which hitters on the opposing team are in the front row, where the setter is and which backrow hitters could be getting a set.

These are 10 volleyball hitting tactics that hitters, especially shorter players can rely on hit against and sideout and score against teams with big blockers in the front row. (Lt Mayers)

There are three primary things to communicate in volleyball, especially when your team is on defense.

1. Call out which hitters on the opposing team are in the front row,

2. Identify where the setter is whether she's front row or backrow and

3. Which backrow hitters could possibly be getting a set

You need to develop great communication skills especially while your team is on defense and during rallies. 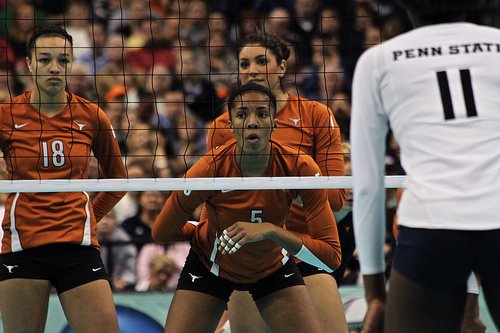 Texas blockers, including USA Olympian Rachael Adams communicate with each other at the net calling out who the opposing hitters are in serve receive.

These are communication habits that college and professional players adopt, so that means its a good idea you do the same.

When your team is on defense, the defensive players at the net, the blockers, should be calling out where the setter is and where the eligible hitters are in serve receive.

One of the things players need to communicate in volleyball is where the setter is.. whether she is in the front row or backrow.

The front row players on defense should call out and identify to each other and the backrow what players could possibly be hitting once the rally starts. 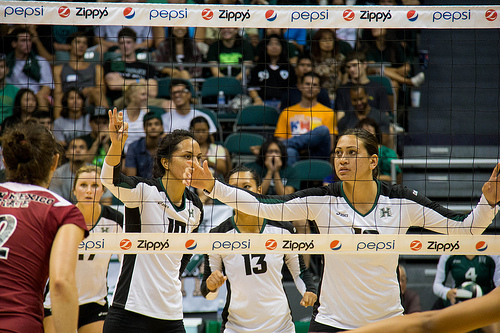 Front row players communicate in volleyball. They call out which hitters on the opposing team are in the front row, where the setter is and which backrow hitters could possible be getting a set.

Its on defense that players should be talking and communicating with each other the most.

The defensive players need to call out what play they see developing as or before they see it developing.

Unfortunately a lot of volleyball players stay quiet when they are on defense and they assume that everybody on their team is seeing the same thing.

People will always interpret what they see differently. Some interpretations will be similar but many will vary.

Players should communicate in volleyball so that team members "see" or interpret the same things, in the same way at the same time.

How do you get six players to do that?

To be sure members of your team are seeing the same thing, good communication skills are needed.

As players see a play developing they need to "call out the play" or talk about the action out loud to their teammates so that everyone on the squad knows and understands and can anticipate what moves or adjustments they need to make to play defense against the opposing team's impending attack.

If there are three or four or five voices from players all calling out the same thing that they see happening across the net, then everyone knows that all the team members are seeing the same play.

When this happens, its easier to make adjustments as a whole team, as opposed to just one person doing one thing in defense while two or three others do something else.

Communicating in volleyball defense prevents players from having to guess what is on each other's minds.

The more they talk to each other the more they know that each team member is seeing the action in the very same way.

Communicate in Volleyball:
Call Out The Front Row Setter 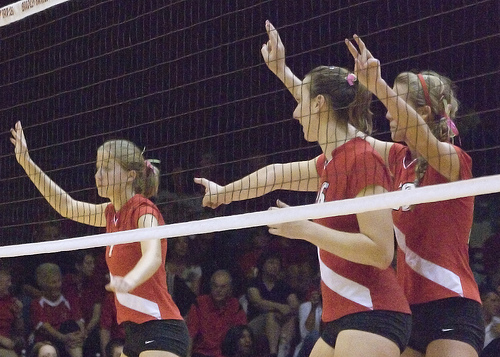 An "attack" can come in the form of a hit, a spike or a tip which in the setter's case is called a dump.

When the opposing setter rotates to the front row, everybody on the defensive team should be talking about it before the whistle is blown to start the really.

Too many setters make too many easy points when they are front row because the opposing teams blockers didn't know or didn't communication with each other or their back row teammates by calling out loud that the opposing team's setter rotated up to the front.

Once a setter rotates up to the front row, and the team is playing something like a 4-2 or 5-1 offense, then that setter can attack the ball like any one of her hitters.

An "attack" can come in the form of a hit, a spike or a tip which in the setter's case is called a dump.

A dump is when the setter fakes like she is going to set one of her two front row players, and instead she "dumps" the ball over the net on the second contact into an empty space on her opponent's court.

A setter can dump a ball by using one hand or she can use two hands but either way, similar to a "hitter", if the setter doesn't have a block in front of her to try and stop her from tipping or dumping the ball over the net, then she is in great position to make extremely easy points.

Let me repeat, the front row setter is in position to make ridiculously easy points, by dumping the ball over the net especially if no one on the opposing team's defense, particularly the front row blockers, are paying attention enough to call out the fact that this setter is now in the front row.

Oftentimes only one or two players, usually the middle blocker and maybe one setter who's paying attention will call out "front row setter!"

in an effort to communicate to their team which hitters on the opposing team are in zones 2, 3 and 4. 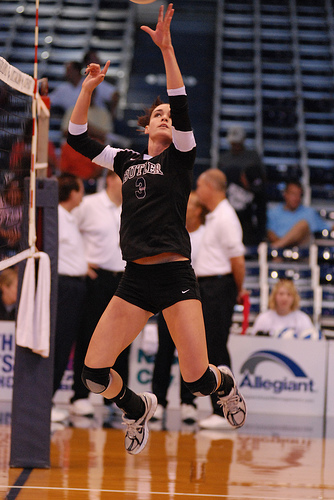 But since it's usually the back row defenders that have to dig the setter's front row tip attack, it is really, really much more effective if five or six player voices communicate about the fact that she has rotated up to the front row.

This means everyone should be paying attention as to who the opposing team's front row attackers are and where the setter is at all times.

A front row blocker usually the one playing on the left side should take the responsibility of telling everyone on their team "Hey, I'll stay with the setter, she's right here in the ____position."

She should say this at the net, before the referee whistles for the serve and in a loud voice so all the members of her team can hear her.

Smart Tactics:
Where Do You Go Now?


Read more about volleyball tactics on these pages.