The Beach Volleyball Forearm Pass Who Takes The Middle of the Court?

With so much court area to cover, it's crucial partners establish who will use the beach volleyball forearm pass first when served to some areas of the court. 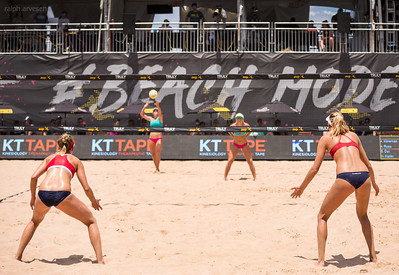 The Beach Volleyball Forearm Pass: Before the ref blows the whistle partners need to determine who's taking the balls that are served to the middle of their court. Here's how. (R. Aversen)

The Beach Volleyball
Forearm Pass:
Who Takes The Middle?


For players learning the beach volleyball forearm pass an important key to remember is to determine before the referee blows the whistle... ...which player will take responsibility for taking the balls that are served to the middle of the volleyball court.

It's important for beach volleyball partners to pre-assign responsibility of who will cover the middle of the court, which to be more specific is the area between the two players in serve receive.

Any smart player serving the volleyball knows that the middle of the court can be a weak spot where direct points can be scored easily. 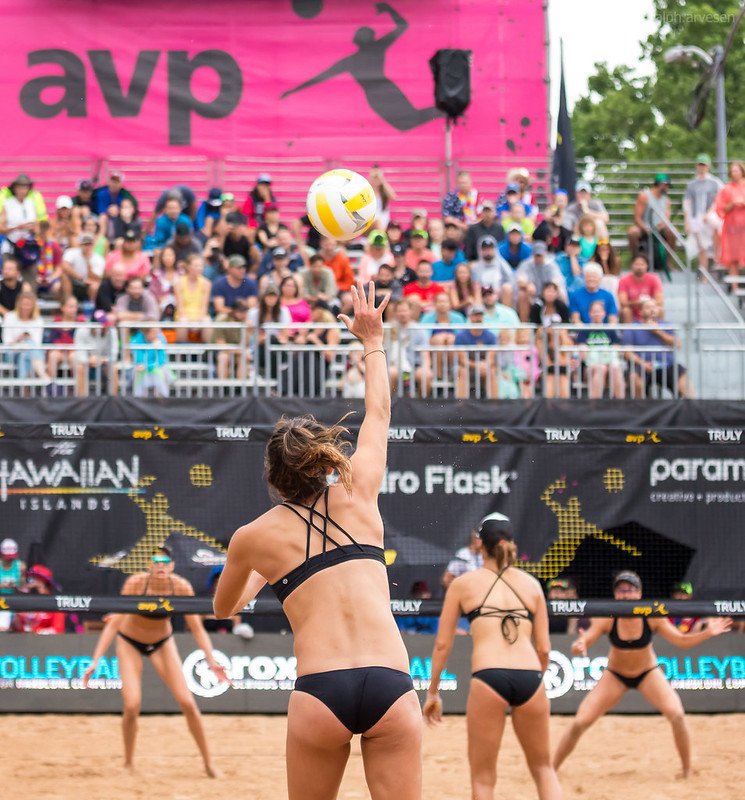 Any smart player serving the volleyball knows that the middle of the court can be a weak spot where direct points can be scored easily. (Ralph Aversen)

If they can serve the volleyball in a way that causes confusion between the two partners, then in many cases neither partner will move to pass the ball and the server on the opposing volleyball team gets an ace to her credit.

To reduce the possibility of neither player moving to pass the ball served to the middle of the court, once the server on Team A gets into position to serve the ball, the opposing beach volleyball passer on Team B who is cross court from that server is responsible for passing the volleyballs that the Team A server may serve to the middle.

The passer on Team B that is directly in front of the opposing team's server is responsible for passing the volleyballs the server may serve down the line.

The passer on Team B that's directly in front of the opposing team's server is responsible for passing the balls the server serves down the line. (black bikini top red bottoms) (Aversen)

Of all the volleyball passing strategies to adopt the key to this one is for partners to communicate to each other, before the opposing team's server serves the volleyball.


The Beach Volleyball
Forearm Pass:
How Do You Call The Middle? 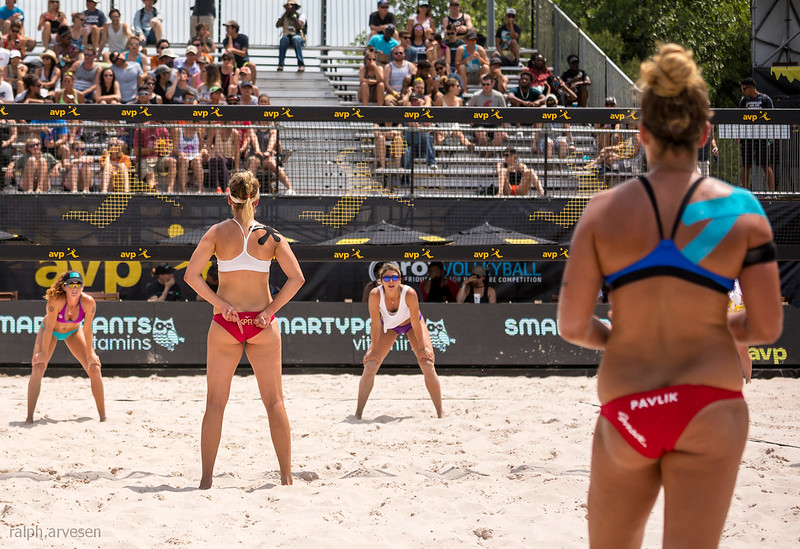 The Beach Volleyball Forearm Pass: Once you see where the opposing team's server is lined up to serve, the cross court passer needs to tell their partner "I got the middle." (Ralph Aversen)

Once a team sees where the opposing team's server is lining up to serve the ball, the cross court passer needs to say out loud to their partner "I got the middle."

When learning how to perform the beach volleyball forearm pass remember that this is a way for partners to clarify which player will pass the volleyball that's served to the middle of the court, before the referee blows the whistle.

Unfortunately, what happens time after time is that without this communication between teammates before the serve, each partner thinks that the other one is responsible for passing the volleyball being served to middle of their court.

So when they get aced, its because neither one of them moved to pass the ball served down the middle. 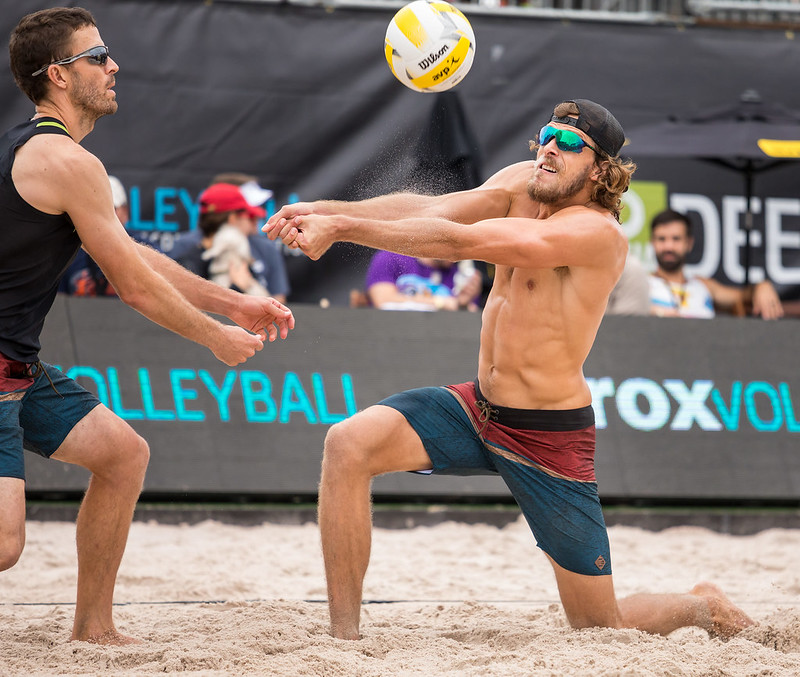 When a server serves a ball to the middle of the court between 2 players they create a "husband and wife play" forcing players to decide quickly who passes. (Aversen)

This happens in almost every beach game where new volleyball players are getting together and learning how to pass the ball side by side for the first time to play with each other.

This situation can easily be avoided with players communicating at the beginning of the play.

The Beach Volleyball
Forearm Pass: How To Pass Against A Jump Server 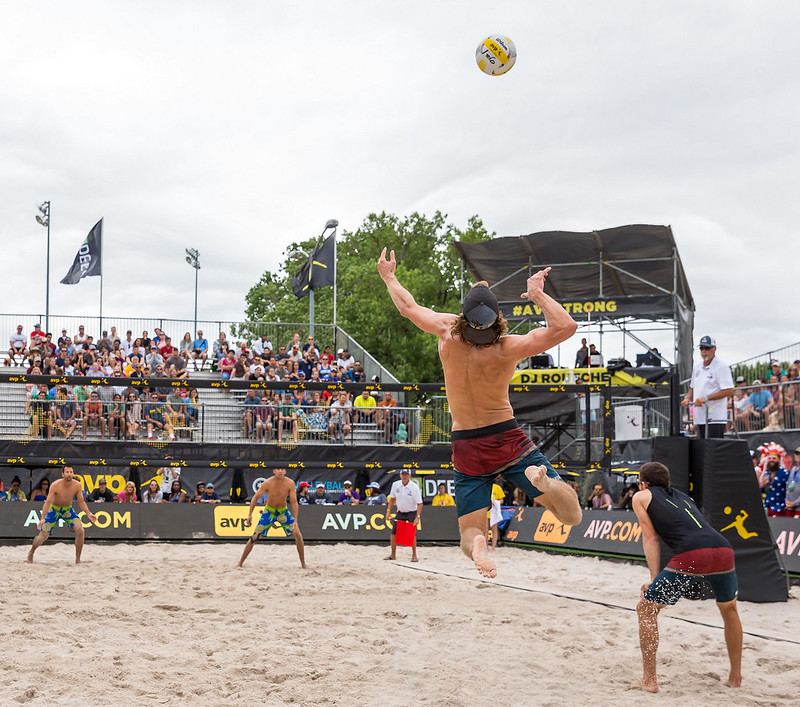 The Beach Volleyball Forearm Pass: When facing a jump server both players need to prepare to cover the middle and be prepared to get behind the ball to pass it straight ahead. (R. Aversen)

When facing a jump server then both players need to be prepared to cover the middle.

No matter what, a jump serve is coming across the volleyball net at a high velocity and that makes it risky to just leave the middle of the court passing responsibility to just one player.

Instead, both beach volleyball players should be prepared to get behind the ball to pass it straight ahead.

Show The Jump Server Something Different

Another thing to remember when learning how to do the beach volleyball forearm pass is that if you are facing a server who has scored a series of points against your beach team, then it's best to make an adjustment by taking one or two steps that cover the area where they served for points.

If my partner and I move a step or two closer to that area, now the server sees something a little different which often is enough to

which should make it easier for your team to pass the volleyball.

Learn More About How To Play Beach Volleyball