When the Under Armour volleyball uniform was introduced, they raised the bar on developing performance fabric and sponsoring All America youth volleyball events 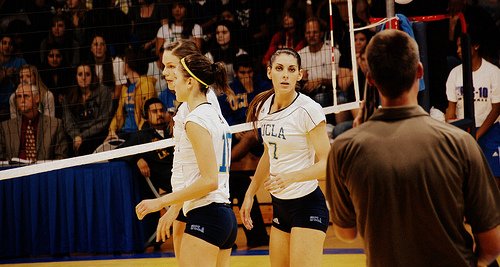 When the Under Armour volleyball uniform was introduced, they raised the bar on developing performance fabric and sponsoring All America youth volleyball events

It didn't take long for the Under Armour uniform to take the sports world by storm.

UA has made no effort to hide the fact that they were ready and willing to take on the big names in the volleyball apparel market.

When the Under Armour volleyball uniform was introduced, they raised the bar on developing performance fabric and moisture management technologies to a whole new level.

The First Under Armour T-Shirt

Ten years ago, after the creation of the first T-shirt, Under Armour developed its trademarked line of microfiber gear and launched their amazing entry into the performance product industry.

The company's latest textile innovations and the development of new technologies that continue to improve their products are developed in their own fabric lab.

Sure, Under Armour started out by producing athletic apparel for football players, but as the success of their company grew so did the need to manufacture apparel for other sports.

When sportswear companies need to get the word out about their products they usually partner with spokespeople, other famous volleyball athletes that agree to

about how great their brand is.

USA Volleyball Olympic Silver medalist Kim Glass, one of the first famous female volleyball players sponsored by UA has worn Under Armour uniforms, clothes, workout apparel as one of the company's the first volleyball testimonials.

Under Armour goes behind the scenes with world class Volleyball player Kim Glass about how she trains and what motivates her to the best.

Although she's on the USA Volleyball National team which is exclusively outfitted by the Adidas volleyball brand, Kelsey is personally sponsored by UA.

Here she is in a video produced by Eastbay and featuring Under Armour volleyball apparel.

Kelsey Robinson earned her starting spot on the Women's National Volleyball team by dominating in any position on the court. #unlikeany pic.twitter.com/XY7dLwawO7

Watch how Kelsey documents what its like to win a Turkish championship game.


Under Armour Volleyball Sponsors
AVCA All American Programs and Events

Since 2011, Under Armour All America Volleyball has been the sponsor the American Volleyball Coaches Association identification, nominations and selection of High School All Americans.

Under Armour Volleyball is the title sponsor of the AVCA Girls Talent Showcase during the AVCA Convention.

AVCA PHENOM powered by Under Armour

According to the AVCA this recruiting event draws nearly 350 athletes from all over the country to be seen by just as many coaches.

The AVCA All American Program Sponsored by Under Armour Volleyball

Here's a quick video demonstration on how to use the MaxPreps website to nominate a high school volleyball senior for Under Armour All-American.

High school volleyball season ended a month ago for ‘Iolani senior Elena Oglivie, but she has another globe-trotting adventure ahead.

Oglivie was presented her jersey for the Under Armour All-American volleyball tournament and will play in Florida on Dec. 31.

The four-time Star-Advertiser All-State, two-time player of the year chatted after a morning presentation in Seton Hall. (Honolulu Star Advertiser)


Under Armour Volleyball
All American Athletes

The 2016 Under Armour Volleyball All American Match and Skills Competition


What are Under Armour volleyball uniform reveal videos?

These are called "volleyball uniform reveal videos" promote the new uniforms that will be worn the current season during travel matches, home matches and at tournaments.

I consider these "commercials" featuring team members used as a way to hype and promote the brand name of the company providing the uniforms to the team.

What a brilliant way to get people to talk about a brand.

it's become a big annual event each year for collegiate teams to shoot a commercial or hype video which features your brand, logo and clothing.

South Carolina gets my vote for best looking uniforms this season...Don't know about the army green in the color scheme, but it works!

The "other" USC managed to get everything on their jersey, from SEC logo, to Gamecock logo to UA logo, to a baseball and/or hockey striped sleeve AND block printing all on a 3-4 colored jersey, wow!

We had an awesome time at the @quantzphoto studios, shooting some photos for the upcoming season and debuting our 2017 jerseys! Take a look! pic.twitter.com/lAfp3CUsWE

Bruins rockin' lots of powder blue with their Under Armour volleyball gear...

It's August, which means volleyball season starts this month! Can't wait to debut our new @underarmour uniforms in a few weeks! #GoBruins pic.twitter.com/ZvA6fhwMeI

Two years ago Hartford University rolled out a new logo for their Hawks athletic program. The logo features a huge red H with a hawk in flight to serve as the cross bar in the H.

All the Hartford athletic teams received new gear and a choreographed  "surprise" locker room reveal was filmed as the team saw their new uniforms with the new logo for the first time.

Featured are three volleyball jerseys in Cal blue, Golden bear gold and white all with contrasting colored stripes along the sleeves elbows.

One of the few teams to spotlight their playing shoes, the video highlights the Under Armour Charger volleyball shoe which comes in high top and low top versions.

Watch as Coastal Carolina reveals their Under Armour uniforms.

Particularly gorgeous because of the color hues chosen to match the ocean waters.

The Fighting Irish are honoring the 175th anniversary of their collegiate institution with a patch on their new uniforms.

#Tradition #Details
The 2017 uniforms will feature a special 175 patch to honor the 175th anniversary of the University! pic.twitter.com/7U4j7XNHHl