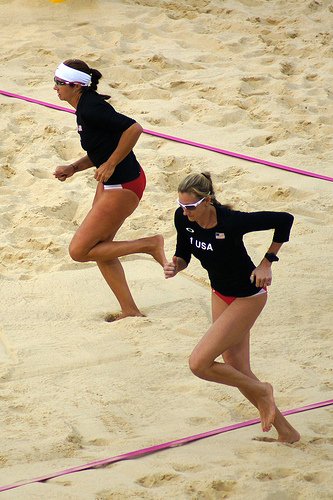 2001: Christopher "Sinjin" Smith partnering with George Roumain, played his final match of his long and industrious career against Dax Holdren and Todd Rogers in the 4th round of the contender's bracket at the AVP Manhattan Beach Open.

Sinjin retires as the leader in the most beach volleyball tournaments played with 416, second in all-time victories with 139, and fourth in all-time winnings with over US $1.6 million earned.

2002: In an effort to make the beach game more fast paced and TV friendly the beach volleyball court dimensions were reduced to 8m x 8m per side.

2003: Karch Kiraly created another milestone in beach volleyball history by becoming the first volleyball player to earn three million dollars in prize money and the oldest player to win an AVP beach volleyball tournament at age 42 years, 9 months and 14 days.

2004: Without losing a set, Kerri Walsh and Misty May Win the gold medal and the Women's Olympic Beach Volleyball Title in Athens, Greece.

She becomes the third American beach volleyball player to achieve that mark.

She is the 18th person worldwide to win over $1 million in her career, and did so in fewer events (90th tournament) as well as being one of just four to reach the mark before turning 28 years old.


Insuring his mark in beach volleyball history, Karch's longevity was marked by the fact he won a tournament in 24 different years, and he advanced to the semifinals in over 75% of all the events he ever played and was named as the AVP's Most Valuable Player a record six times.

Learn more about the history of beach volleyball in the pages below.