Volleyball Back Row Attack: An Offensive Strategy For Setters To Use

These volleyball back row attack rules explain what can happen when your setter decides to set one of her back row hitters during a rally.

In serve receive, a back row player, which can be anyone in the second row except the libero, can take part in the offense. (Michael E. Johnston)

What is a volleyball back row attack?

A Back Row Attack is an Offensive Volleyball Strategy

Did you know that a back row player can attack a ball during a rally?

In serve receive, a back row player, which can be anyone in the second row except the libero, can take part in the offense.

What's most important about the volleyball back row attack is that the hitter has to take off, meaning, they have to start their spike approach and be in the air to contact the ball...from behind the ten foot line.

That's what keeps attacking from the back row a legal hit.

To be clear, if the hitter lands behind the ten foot line after attacking the ball, then no problem.

If a back row hitter attempts a spike approach and their toe or foot touches or crosses over the ten foot line during any part of the spike approach jump before contacting the ball...then that becomes a big problem. 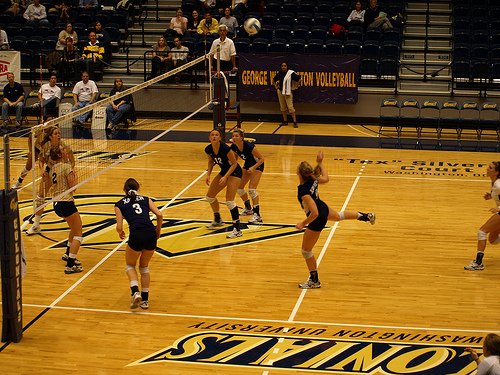 This is where the referee will blow their whistle and signal for the opposing team to earn a point and the serve.

A back row hitter, according to official volleyball game rules and regulations a back row hitter cannot touch any part of the ten foot line, also known as the three meter line, when on their way up during their spike approach to hit the ball.

Although its rarely seen, because its hard to do, you can hit a serve back over the net if the ball is landing behind the ten foot line.

Volleyball Back Row Attack
What can a back row       hitter do?

A backrow hitter is allowed to cross over the ten foot line during a rally and attack hit a ball as long as a part of the ball is below the level of the net when they make contact.

Lastly neither a front row or back row player can attack a serve from the opposing team when the ball is inside the ten foot line and higher than the top of the net.

So, no one in serve receive can approach jump and spike or tip a short serve that's about to land inside their ten foot line and is higher than the top of the net.

Volleyball Plays
Where do you go now?

What do you need to do now? You have three options:

Learn more about offensive strategies like the volleyball back row attack in the pages below!