Learn the volleyball offensive plays and strategies the setter calls so her hitters know what different types of sets she plans to run when she calls the plays. 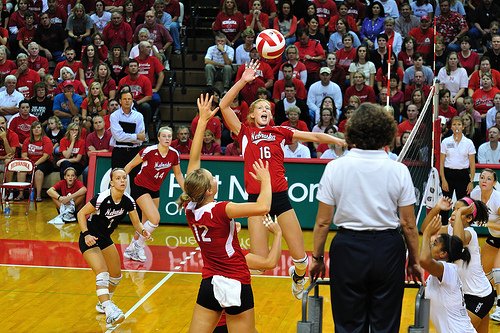 Learn the volleyball offensive plays and the different types of sets the setter calls to her hitters in order to run the offense.

What is an offensive player in volleyball?

The setter and the eligible attackers on the serve receive team are the offensive players during a volleyball rally. 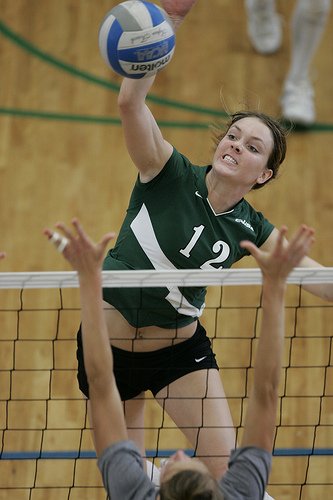 The front row and back row hitters also known as spikers or attackers on the receiving team are responsible for attacking in volleyball. 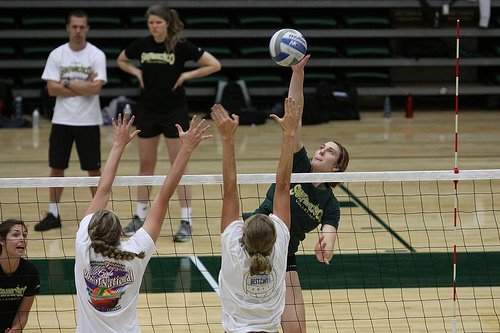 The front row and back row hitters also known as spikers or attackers on the receiving team are responsible for attacking in volleyball. (Shaun Calhoun)

Volleyball Offensive Plays
What is attacking in volleyball? 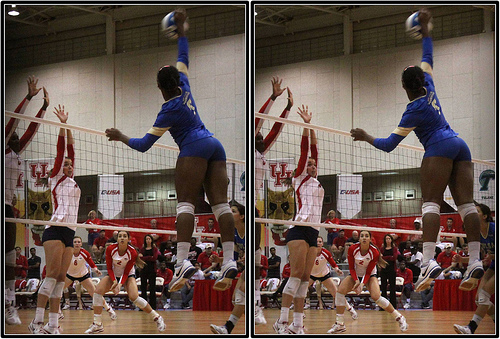 Attacking in volleyball means when a hitter is set a ball they take a 3 or 4 step spike approach before jumping in the air before swinging at a ball to propel into the opposing team's court.

This means when they are set a ball they will make a three or four step approach and launch themselves in to the air before swinging at a ball to propel a hard driven hit into the opposing team's court to score a point.

The setter is responsible for running her team's offense.

When her team is in service receive, at the beginning of each rally, its her job to tell her hitters what type of set each of them are going to get if

a) she gets a good pass and/or

b) she doesn't get a good pass

If she gets a good pass then she'll run an "in-system" play.

If she doesn't get a good pass then she'll run an "out-of-system" play.

What does it mean to run a play in volleyball?

When a setter tells her eligible hitters what set each of them will hit, its called "running a play".

The "play" or "offense" she runs consists of different types of sets.

The "play" or "offense" she runs consists of different types of sets.

Some sets are higher, some lower, some faster, some slower, most are front court sets but she also has a combination of back court sets she gives to her back row hitters.

While fast sets are lower to the net, slow sets are higher sets pushed 8 - 12 feet well above the top of the net.

Volleyball Offensive Plays: A setter can "run a play" with a series of slow or fast sets. Fast sets are lower to the net, slow sets are higher sets pushed 8 - 10 feet well above the top of the net.

Read more about volleyball offensive plays and tactics on these pages.