It's been a minute since I've vlogged! I'm taking you with me through a typical training day at home in the USA Volleyball gym before leaving for Volleyball Nations League. xoxo

Check out Kelsey on the court - the new commercial USA Volleyball Olympian Kelsey Robinson filmed to promote the Adidas volleyball brand which she showcased on her Youtube channel Kelsey & Brian.

What do you think of her new commercial? Let me know in the comments below.

Born and raised in Illinois, Kelsey graduated from St. Francis High School in 2010.

Nicknamed "Ke$ha" she discovered a passion and raw talent for volleyball early on in life which she began playing at just ten years old with the local youth club!

In college, Kelsey played three years of volleyball at the same school I attended and played for ...the University of Tennessee, Knoxville. 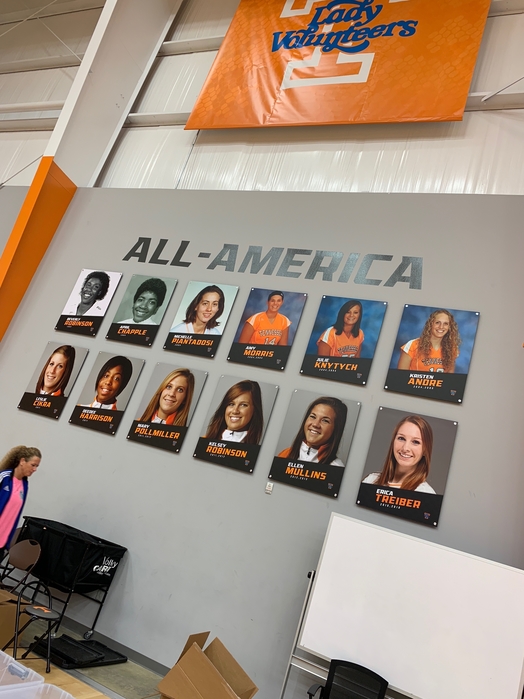 University of Tennessee Knoxville Wall of All Americans - That's me second from left in the top row and that's Kelsey Robinson, third from the right in the second row.

While at Tennessee in 2011, Kelsey was named SEC Player of the Year and AVCA All American Second Team.

An inside look at SEC Player of the Week, Kelsey Robinson by utsportstv


A look at the Captain for the Lady Vols volleyball team, Kelsey Robinson.

Then she transferred her senior year and played for the Huskers at the University of Nebraska-Lincoln where after one year, she won the Big Ten Player of the Year, was named as an AVCA First Team All American in 2013 where she graduated with a degree in Broadcast Journalism.

The Nebraska Volleyball Team welcomed to two transfers from the University of Tennessee in the offseason. Hear from Mary Pollmiller and Kelsey Robinson in this Nebraska huskers video feature!

Here is 2013 AVCA First-Team All-American Kelsey Robinson (Nebraska) at the AVCA All-America/Players of the Year Banquet presented by Northwestern Mutual. This banquet was held in conjunction with the 2013 AVCA Convention in Seattle, Washington.

In 2015 Kelsey played for a Puerto Rican team Leonas de Ponce and in the same year was signed to play her first year in Italy one of the top league's in the world.

In 2016 -17 she played in Italy on the Imoco Volleyball Team where she helped win a silver medal in the CEV European championship title match.

She was named Best Outside Spiker for the match.

In 2017 was Kelsey's first year in Turkey where she played for two years on the Vakifbank Istanbul.

Watch how Kelsey documents what its like to win a Turkish championship game.

8 months and one million games, it all comes down to one last game in our best of five championship series! We finished the season champions and I couldn’t be more proud of this special group of humans!! Check out the moments before/after us winning and coming home to America :)

In Kelsey's own words, "it's humbling to be one of 12 that get to wear that jersey when it's time to play, and it means everything" (Lincoln Journal Star, 2016.)

Changing teams or getting a new partner on the sand can be a big life change. Professional volleyball athletes, like Kelsey Robinson, Phil Dalhausser and Lane Carico, give their tips to adapting to those changes, and not letting the daunting transition wear them down.


In 2014, Kelsey won gold at the World Championships alongside her national team, defeating China 3-1.

That same year she was selected for the USA Women's National Team in 2014 and participated at Montreux Volley Masters where she won a silver medal.

When the FIVB Volleyball World Grand Prix Finals rolled into, Omaha, USA, one player who drew plenty of attention was Kelsey Robinson. With the international season now at an end, the FIVB is looking back at the best players from all of the major tournaments from 2015. The home crowd were familiar with the 23-year old’s powerful hitting having seen her turn out for NCAA side Nebraska Huskers a few years earlier. Robinson duly delivered a devastating performance at the Finals to be named second best outside spiker as the hosts took gold.

She also won bronze at the World Cup in 2015 and in the same year at the FIVB World Grand Prix, Kelsey was named the second Best Outside Spiker.


The highlight of her career was being selected to represent her country at the Olympic Games in 2016.

In 2016, she was a participant in the Summer Olympics where she contributed to Team USA winning a bronze medal.

Other notable awards include winning the CEV Champions League silver medal in 2016-17.

2018 was a big year for Kelly and her teammates.

She won gold in the FIVB Volleyball Nations League and came in 5th place in the FIVB World Championship.

One of Kelsey's sporting heroes is Michael Jordon. Kelsey wears the no. 23 jersey as an honor to the NBA legend.

On top of this, Kelsey also created her own YouTube channel, "Kelsey & Brian" that follows her personal journey as a professional athlete working internationally.

Watch a Day in the Life of a Pro Volleyball Player

Check out how I wake up in the morning and what I do to give my body that extra love it needs! Plus a few fun clips of what I do in Istanbul when I’m not in the gym.

In her website, Kelsey explores her passion for travel and adventure.

She also promotes an active and healthy lifestyle, providing creative recipes, travel tips, and an exclusive insight into the world of a pro athlete.

Famous Volleyball Players:
Where Do you Go From Here?

Check out more
Famous Volleyball Players on these pages.